Before reading about EVM traces, you should have a clear understanding of EVM, Execution Clients, Smart Contracts and Nodes. You can read about these topics in the official Ethereum documentation or Alchemy documentation. However, if you just need a refresher, you can find the one-line definitions for these topics below.

There are two types of transactions in EVM-compatible protocols:

The downside of the contract execution is that it is very hard to tell what the transaction actually did. When a transaction is executed, you can get a transaction receipt that contains a status code to check whether the execution succeeded or not, besides looking at EVM traces there is no way to see what data was modified, or what external contracts were invoked.

Look at the transaction flow below: 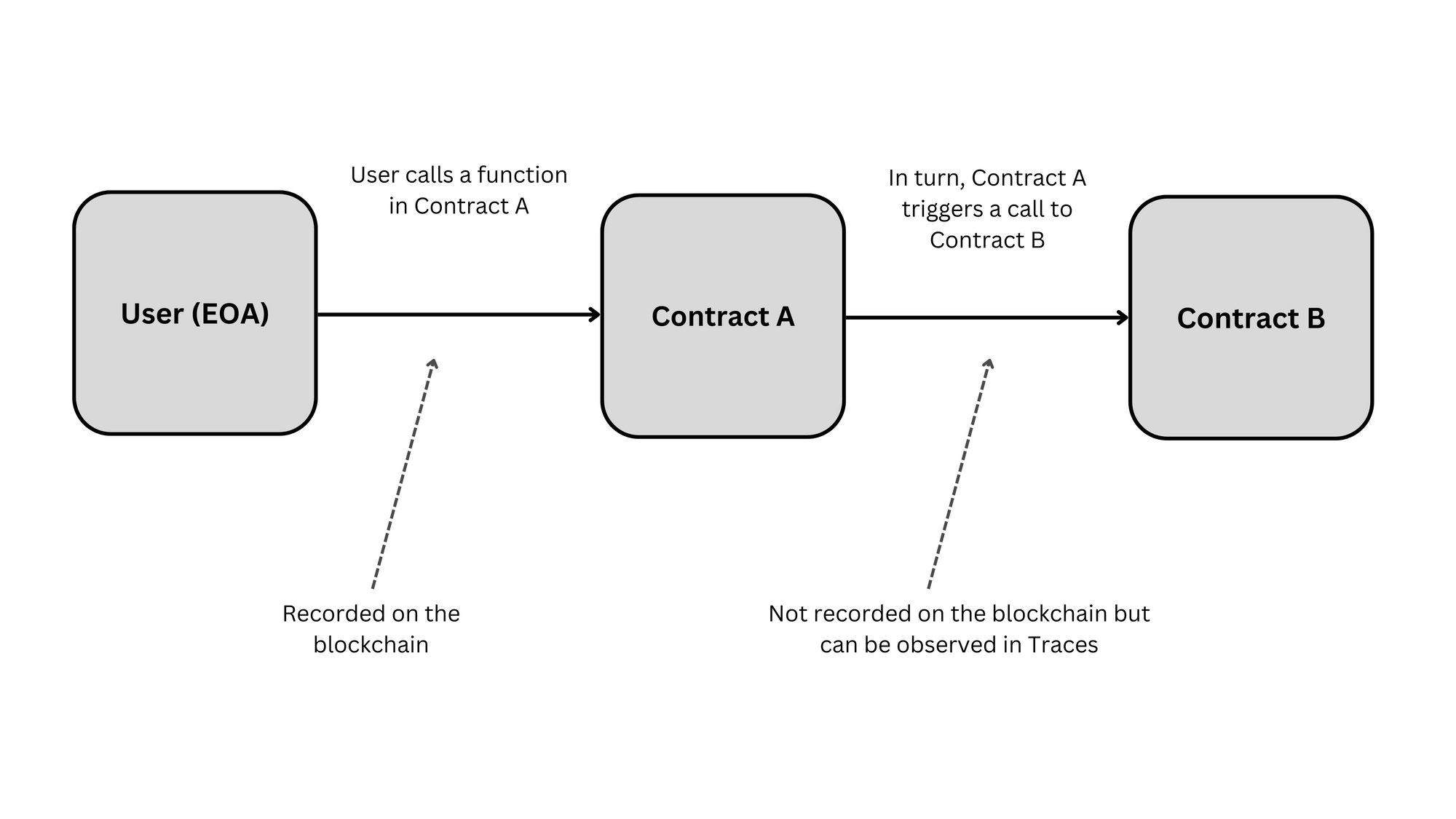 The transaction receipt has a couple of fields, let’s take a look at them one by one:

EVM traces provide a step-by-step record of what happened during the execution of a transaction, including which other contracts were invoked and what data was changed. They help give debugging information that can be used to troubleshoot issues with EVM-compatible smart contracts, which is useful for understanding why a contract behaved in a certain way, or for finding bugs.

So, the EVM traces for this transaction which is also defined in "The Problem" section looks like this (We’ll learn how to retrieve EVM traces in a later section):

Here is an explanation of the above EVM traces (click on the image to zoom into it): 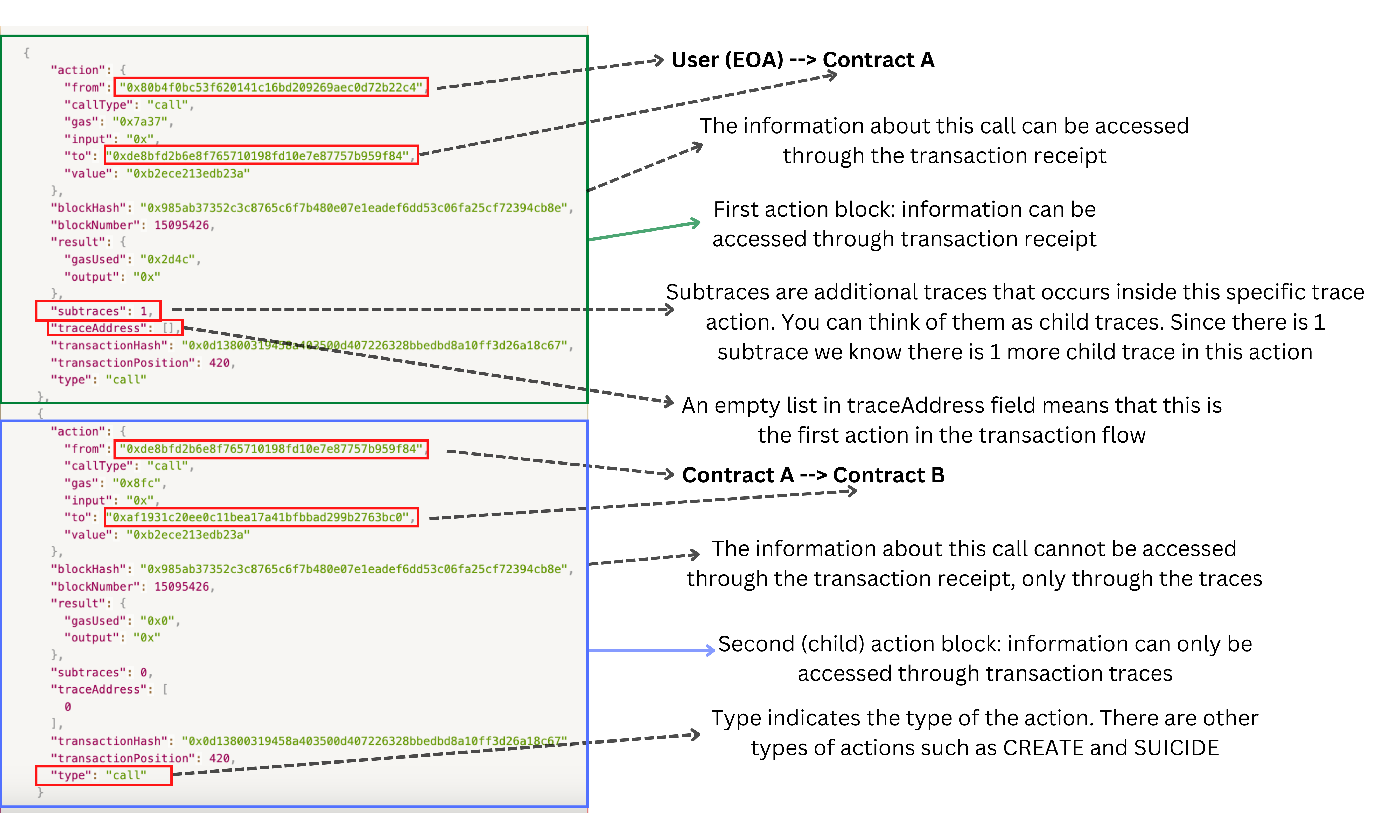 There are many types of actions captured in transaction traces: Some common actions are CREATE, SUICIDE and CALL. Below you will find the structure for these trace actions.

Captured when a new smart contract is created.

Captured when a smart contract is destroyed, which transfers the contract's current balance to a specified address and clear the contract's data, freeing up memory on-chain. The freed space on-chain is processed as a refund towards the total gas cost for completing the transaction.

Used for transferring ETH between externally owned accounts (EOAs) or to call a smart contract function.

Here is a diagram of traceAddress results to help understand how to read this position: 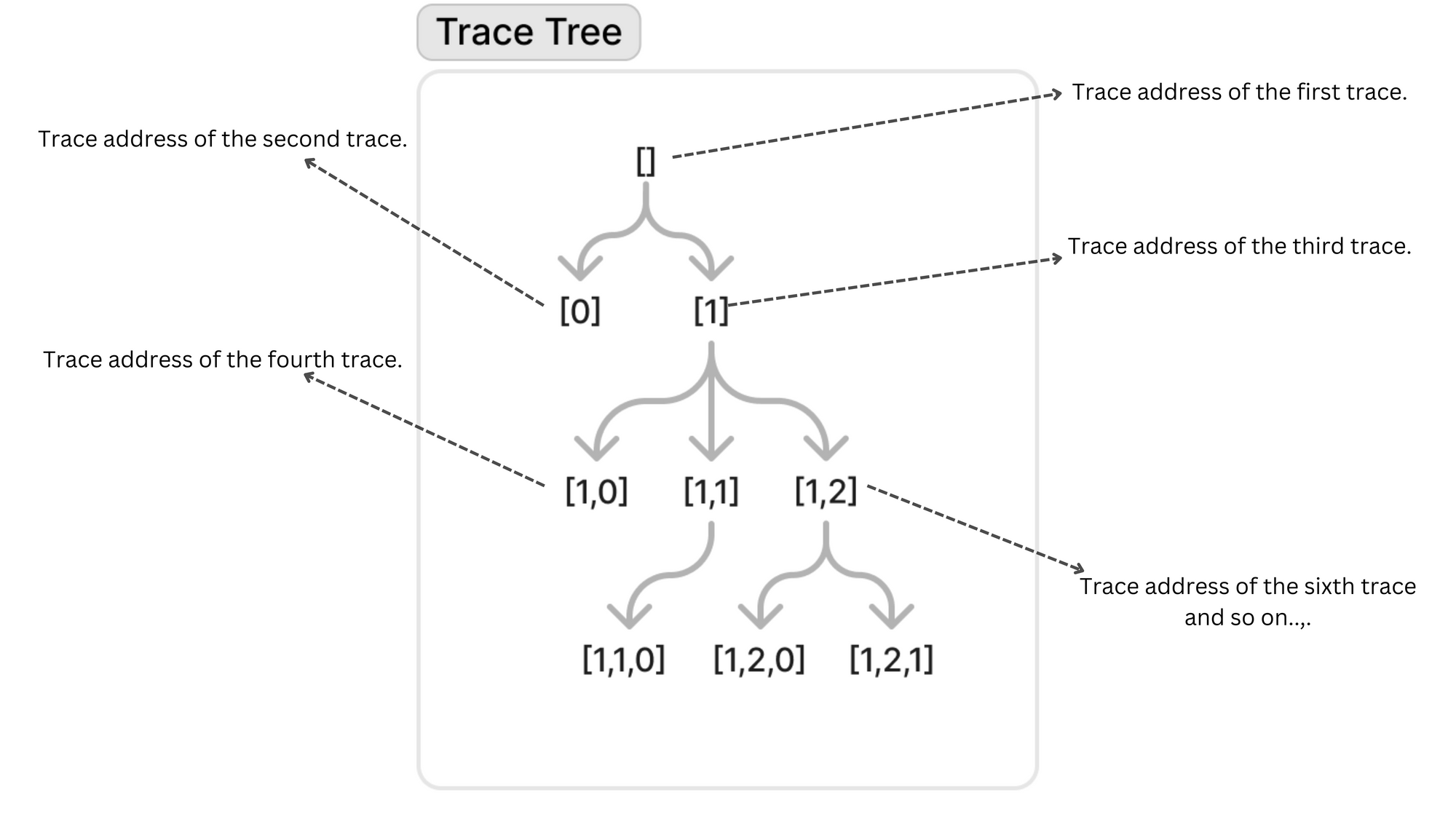 There are many use cases for EVM traces some of them are listed below:

Etherscan and other transaction tracers like txs.fyi help us better understand the flow of a transaction. They extract the EVM traces for a transaction and display them in a way that’s readable by us. For example here is the result for a USDT transfer transaction on txs.fyi.

As you can see it’s clear from the execution trace that the caller called the transfer function of the TetherToken contract and the contract transferred 285 USDT from the caller to the target address.

Here is the link to the above-defined transaction on Etherscan.

How to retrieve EVM traces?

There are several ways to retrieve EVM traces of a transaction.

In conclusion, EVM transaction traces are a valuable tool for debugging smart contracts. They provide a step-by-step record of the execution of a contract and can be used to identify errors and optimize code.